The following is (more or less) the June section of my journal. And since it starts on the first of the month it would be journalistically dishonest to give an account of happenings of the latter days of May. That is somewhat unfortunate because it prevents me from filling you in on the finer points of Listowel Writers’ Week. If it wasn’t for such a restriction I could tell you about the fabulous opening by Seamus Heaney, the prize-giving, readings by such luminaries as Mr. Heaney, Hugo Hamilton, Ann Enright , Lloyd Jones, Zoe Margolis, Pat Boran and Eric P. Kaufman. And of course Mary Lavin, John Banville and Mary Lawson. Not to mention lectures by David Mcwilliams, Diarmaid Ferriter and Brett Paesel. The launches of the works of Billy Roche and (the only surviving) Joe Dolan must remain undocumented here, like George Rowleys “Poets Corner(s)”. Later in the day Mary Lavery Carrig, Paddy Bushe and Nell Regan dedicated their readings to the memory of Michael Hartnett.

And it’s really a pity that I’m not in a position to let you know about the unique piece of art which was unveiled, by Oscar winner Brenda Fricker, as memorial to the late John B.Keane. The limestone monument measuring about eleven feet by eleven was commissioned by Jimmy Deenihan T.D sculpted by Kerry Sculptor, Padraig Tarrant. 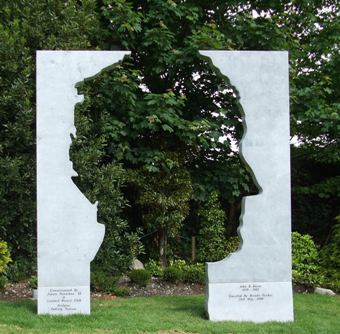 I wasn’t very sure how to describe this ambiguous piece until a prominent Psychologist came to my rescue and, using the term “Figure-ground phenomenon” explained that, “Characteristically any detail observed in the visual field and any contours are always ascribed to figure rather than to ground”.

If I could induce some sort of time-warp I’d be able to tell you about the Eamon Kelly story telling competition and the fabulous literary and historical tour which this year (in broad daylight) went into County Limerick. Enough about the things that I can’t tell you. Now for The Log;

June 01st-It’s the last day or Writers’ Week and needless to say I’m still in Listowel. Local author Paddy Fitzgibbon puts the less cultured among us wise to some lesser known facts about the “mystery of the metre”. John Boyne, author of “The Boy In The Striped Pyjamas” gave a reading as did poet John F. Dean.

June 02nd-Headed back to the peace and quiet of Dublin city.

June 04th- I was told the following story by a well traveled friend,

A big Texan stopped at a local restaurant following a day roaming around in Mexico . While sipping his tequila, he noticed a sizzling, scrumptious-looking platter being served at the next table. Not only did it look good, the smell was wonderful. He asked the waiter, “What is that you just served?”

The waiter replied, “Ah senor, you have excellent taste! Those are called Cojones de Toro, bull’s testicles from the bull fight this morning. A delicacy!”

The cowboy said, “What the heck, bring me an order.”

The waiter replied, “I am so sorry senor. There is only one serving per day because there is only one bull fight each morning. If you come early and place your order, we will be sure to save you this delicacy.”

The next morning, the cowboy returned, placed his order, and that evening was served the one and only special delicacy of the day. After a few bites and inspecting his platter, he called to the waiter and said, “These are delicious, but they are much, much smaller than the ones I saw you serve yesterday.”

The waiter shrugged his shoulders and replied, “Si, senor, sometimes the bull wins.”

June 09th- I was asked to say a few words at the launch of Richard Marsh’s book, “Tales Of The Wicklow Hills”, Wicklow tales of history, myth, legend and folklore going back 2000 years. If you have any connection with Wicklow and/or if you are even remotely interested in the rich heritage of Ireland this book is a must.

June 11th- John McCarthy sent me a report on Mad Pride Day. Mad Pride was the brainchild of John McCarthy, a Cork-based campaigner for the rights of people suffering from mental illness, and aims to dispel commonly held misconceptions about mental illness.
On Sunday, June 8th Cork hosted the first Annual International Mad Pride Day. A fun filled day for all the family at Fitzgerald’s Park. This important event highlighted the normality of Madness to the wider community in an effort to break down barriers and open minds to the need to address one of the country’s hidden problems.
So what is Mad Pride about? Mad Pride is about fun, community, family and facing up to the fact that Mental Illness does not have to be a lonely or hopeless affair. Mad Pride is not about bombarding people with pamphlets extolling the virtues of one approach over another it is more to show the world that Madness is an everyday occurrence that affects us all and can be dealt with openly, lovingly and without stigma. Read all about it at; www. Madpride.wordpress.com

June 12th- Voted in the Lisbon Treaty Referendum. It was a No result making us appear ungrateful to the EU for funding in the past. No doubt our Government will come up with some way of having another referendum like they did when we voted No the first time on the Nice Treaty. It reminded me of when I had the schoolteacher girlfriend; she would keep me awake all night saying, “You’ll keep doing it ‘til you get it right”.

June 14th- I interviewed two members of “The Beermats” (The Ballyfermot Balladeers) on my radio programme. Learn all about them and their forthcoming tours on www.beermats.com (If you want a request played for anyone email me at mattielennon@eircom.net)

Soon will the Midsummer pomps come on.

Soon will the musk carnations break and swell

Somehow I look on the longest day of the year as a metaphor for life. It always strikes me on this day that I haven’t made the maximum use of my year/life so far.

Photographer Spenser Tunick convinced 2,500 people, of both sexes, to shed all clothes at dawn near the Dublin Docklands. I didn’t participate. What have I got against nudity? . . . No pockets!!

June 29th- Last month I told you that I would be participating in a Hillbilly Tractor Run in aid of Kare and that I would be dressing up as a “’Fifties”. West Wicklow farmer. Well the day came and I drove an antiquated tractor around the beautiful Blessington Lakes but I was missing a piece of costume. I didn’t have the mandatory Wellingtons and this was rectified by Mercedes Simpson of Sputnikscomms, Great Marlborough Street, London, who presented me with a pair of “Hunter’s Originals”.

June 30th- I was moaning about the fact that half of 2008 has now vanished into the gulf of Eternity and that every year is going faster. Then it was pointed out to me that life is like a toilet-roll; when it gets near the end it starts going very fast.

Meanwhile, my colleague did a 300 mile walk, in Spain, to raise funds for Multiple Sclerosis Ireland. He wrote the following poem as a result:
What’s new to the first I said
Along the path to where we tread
A misty mountain where they slid and bled
Where feet so sore a shoe it bore
As the day grew in and the night got thin
Songs were sung and music lived
To those that knew a tune or two
A new dawn broke
And folks new with caring
Grew to walk this path that James did bless
To travel wide side by side
Friendships grew, who ever knew
What’s in their soul as they took their stroll,
A cross of stones for one to care
A release to air for each to bare
Tears to flow who ever knows
Comes to grace this special place
A song is sung a tune is played
To reach the heart of a loved that part
We know you're there, we know you care
Along the path as we have a chat
Shells cast a mystic spell
To help us through what we can tell
Peregrinos smile as they meet and greet
as folk-lore bore
You feel the souls of those before
A mass is said and prayers are read
To bless those the Camino tread
Pilgrims old and pilgrims new
I send you light of healing bright
For no one else can fill your shoes.
© June 2008 Norbert Corrigan

Here is some info for any one who would like to join in this noble effort:

To report problems with this page, email Webmaster